The application of trichogramma by drone to control the corn borer

French manufacturer of drone equipment, Skyinnov presents in this article the advantages of biological control of the European corn borer by aerial means, via the diffusion of trichogramma capsules, natural enemy of the borer.

Accidentally imported from Asia in the early 2000s, with the international trade of plants, the moth is a species of butterfly (lepidopteran) whose larvae, in the form of caterpillars, are particularly fond of corn, but also boxwood, sunflower, hops, hemp …

Very voracious, the caterpillars devour the leaves very quickly and thus cause considerable damage to the crops. The corn borer also digs galleries in the stalks of corn weakening the feet and also promoting the appearance of other diseases, fungi …

More recently detected around 2010, the boxwood borer is also doing considerable damage in parks and gardens, in the absence of natural predators, due to its recent appearance. It is easy to recognize an infected boxwood: the leaves are cut and there are traces of silk (like spider webs). As you approach the leaves, you will quickly see many small, very recognizable black-headed caterpillars.

Once the borer has appeared in crops, what are the means of controlling this pest?

2. Means of control against the European corn borer

We have mentioned it, the moth is an insect of the butterfly family, which passes through several larval states (egg, larva, caterpillar, butterfly…). The means of control will be adapted according to the larval stage and of course to the extent of the crops to be treated. For boxwoods, at a private home or in a park, it is preferable to use a targeted spraying of Thuringian bacillus, a very effective natural method.

Here, we will focus on the means of control of the corn borer in agriculture. We can distinguish 3 main ways of controlling the European corn borer:

GMOs are the creation of genetically modified corn varieties to make them more resistant to predators or fungi. This solution has the advantage of limiting or even banning the use of chemical products on crops and thus limiting the environmental impact and treatment costs despite the fact that the seed is about 15% more expensive. This is known as a Bt corn variety, which has been authorized in France since the year 2000. However, there is a risk that the insects will develop a resistance capacity to the GMOs and there are questions about their long-term effectiveness.

The chemical treatment of corn plots consists of the use of insecticides (pyrethroids) whose effects on the health of wildlife and humans are increasingly criticized.

There is finally an ecological solution that is just as effective as chemical treatments. This solution consists in using a well identified natural predator of the moth: the trichogramma, which we will focus on.

3. Trichogramma, a natural predator of the European corn borer

Unless you are at the top of the food chain, every living thing has a predator. Fortunately, this is also the case for the European corn borer. Some birds or bats feed on this insect but it seems complicated to exploit these predators in agriculture. However, there is a microscopic wasp whose female has the good idea to lay eggs in the moth’s eggs, which in developing will kill their host in order to feed on them. The misfortune of some makes the happiness of others and especially that of the corn farmers 🙂

This tiny insect, less than 1 millimeter, is called the trichogramma. (genus trichogramma). 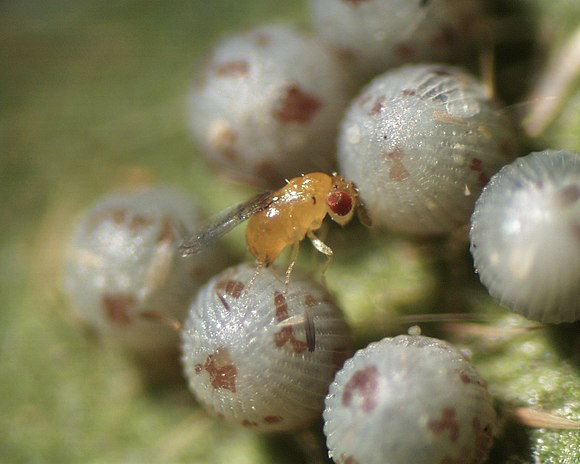 Trichogramma is an oophagous parasitoid. It is this characteristic which will be exploited in the fight against the corn borer, a technique developed in the 1970s. Indeed, this technique consists in killing the moth in its egg thanks to the mass use of Trichogramma larvae whose females will come to lay directly in the moth eggs. These larvae will kill their host to feed and develop. It should also be noted that Trichogramma is safe for humans and other wildlife.

So how can trichogramma be used effectively against the European corn borer in modern agriculture?

4. The use of trichogramma in modern agriculture

The use of trichogramma against the corn borer is the most widely used biological technique in agriculture in France with more than 125,000 hectares treated each year, or more than ¼ of the total area. This technique is very efficient, but requires a perfect mastery that research carried out by INRA in the 1970s and then by various organizations such as INVIVO, ARVALIS, the chambers of agriculture… have perfected.

Indeed, “producing” trichogramma, thus a living being, is not as simple as making chemicals. Different techniques were used to store the Trichogramma in a surrogate host (flour moth eggs) and then block the development process of the parasite at a certain stage, in order to maintain it for 9 months, for use in the spring in corn fields.

In order to optimize the effectiveness of the treatment, trichograms are mixed at various stages of development to control the corn borer at all these stages of evolution. The goal is to destroy the eggs as they are laid before they hatch.

Finally, it is necessary to spread the Trichogramma larvae at the right time, that is to say when the first moths lay eggs. This involves increased monitoring of crops by region to determine the ideal time. The farmer will then have to intervene quickly and massively to treat his plots effectively. Several methods are then available to distribute Trichogramma in the field. It can be a manual method where it will be necessary to walk through the fields and then place trichogramma plates at a fixed distance. With plots that can reach several dozen hectares, it seems difficult to treat effectively by hand. There are then mechanical methods that consist of automatically depositing capsules containing Trichogramma larvae at a fixed distance. Several types of motorized equipment are used to move through the fields, but they can cause some damage to the crops or be hindered by soil conditions or irrigation systems.

The advent of the drone will make it possible to respond effectively to these challenges: to cover large distances quickly without damaging the crops by diffusing the capsules with great precision.

5. The application of trichogramma by drone

The aerial application of Trichogramma requires the manufacture of perforated biological capsules (cellulose, starch…) containing several hundred female Trichogramma larvae, which will lay eggs in the corn borer eggs. These capsules will be dropped at a fixed distance from the air via a drone specially equipped for this purpose. The life span of the larvae is about 7 to 8 days, it is necessary to act quickly. The drone proves to be an extremely effective tool to achieve this objective.

The drone can cover 1 hectare in just 2 minutes, by dropping a capsule (every 10 meters)! Moreover, flying a drone is much less restrictive and expensive than other motorized devices such as helicopters or airplanes. Indeed, the drone flies a few meters above the plots and can thus drop the capsules with great precision.

In order to accompany the experts of aerial spraying by drone, the French manufacturer Skyinnov is developing new generation of trichogramma capsule spreaders by drone. Electronically controlled, these spreaders are very reliable. Program your drone according to each plot, set the spreading speed and let the drone act. We will present these spreaders in more detail in a future article. 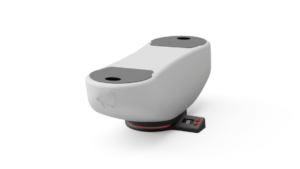 The use of the drone in modern agriculture is obvious as it brings new economical, reliable and efficient solutions. Trichogramma release is a perfect example, combining the use of ecological solutions in the treatment of a pest with advanced technologies to guarantee productivity and integrity of the plots. There is no doubt that the use of drones in agriculture will accelerate in the coming years.

Discover in video the principle of operation of the release of trichogrammes by drone, carried out by the company AEROVISION in Alsace:

T-drop: assessment of the 1st season of trichogramma spraying by drone

In the spring of 2022, Skyinnov launched a new drone-based trichogramma bead application system on the market. The T-drop spreader is the

When a single owner has multiple electronic reporting devices, there is a significant risk that they will mix up the unique identifiers

How to register your Remote ID on AlphaTango ?

Electronic signaling will be mandatory for all aircraft weighing more than 800 grams by the end of December 2020, as we know!

HelicoMicro.com: Get the most out of remote electronic beacons!

Helicomicro.com, a reference and information site on drones has just published a practical article on the products under study at Skyinnov. As

This website uses cookies to improve your experience while you navigate through the website. Out of these cookies, the cookies that are categorized as necessary are stored on your browser as they are essential for the working of basic functionalities of the website. We also use third-party cookies that help us analyze and understand how you use this website. These cookies will be stored in your browser only with your consent. You also have the option to opt-out of these cookies. But opting out of some of these cookies may have an effect on your browsing experience.
Necessary Always Enabled
Necessary cookies are absolutely essential for the website to function properly. This category only includes cookies that ensures basic functionalities and security features of the website. These cookies do not store any personal information.
Non-necessary
Any cookies that may not be particularly necessary for the website to function and is used specifically to collect user personal data via analytics, ads, other embedded contents are termed as non-necessary cookies. It is mandatory to procure user consent prior to running these cookies on your website.
SAVE & ACCEPT